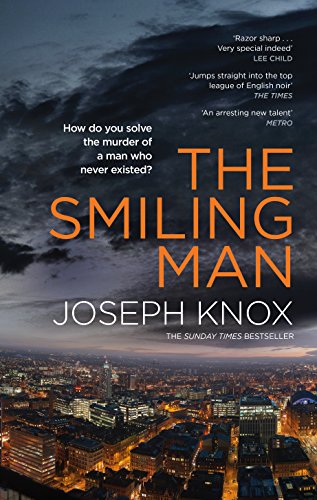 From the bestselling author of Sirens, Detective Aidan Waits returns - on the hunt to find the identity of The Smiling Man. 'An arresting new talent' Metro ‘I usually experienced the presence of a dead body as an absence, but in this case, it felt like a black hole opening up in front of me’ Disconnected from his history and careless of his future, Detective Aidan Waits has resigned himself to the night shift. An endless cycle of meaningless emergency calls and lonely dead ends. Until he and his partner, Detective Inspector Peter ‘Sutty’ Sutcliffe, are summoned to The Palace, a vast disused hotel in the centre of a restless, simmering city. There they find the body of a man. He is dead. And he is smiling. The tags have been removed from the man’s clothes. His teeth filed down and replaced. Even his fingertips are not his own. Only a patch sewn into the inside of his trousers gives any indication as to who he was, and to the desperate last act of his life... But even as Waits puts together the pieces of this stranger’s life, someone is sifting through the shards of his own. When the mysterious fires, anonymous phone calls and outright threats escalate, he realises that a ghost from his own past haunts his every move. And to discover the smiling man’s identity, he must finally confront his own.

I’d not come across this author, by Joseph Knox, before however I quickly found his first book Sirens had collected some very good reviews. The Smiling Man follows on from the first book although I didn’t feel I was missing out on anything but not having read it (but I have a copy now). Due to past misdemeanours DC Aidan Waits is put on a permanent night shift with DI “Sutty” Sutcliffe. I quickly realised that they were the perfect crime fighting duo – one untrusted and one appalling! They are left to investigate a series of fires in dustbins. More by accident they are called to what turns out to be a real crime scene. A deserted hotel appears to have been broken into. They find an injured security guard and a dead – smiling – man.

This is a very twisty and twisted investigation and story. Most of the time nothing is quite what it seems. Gradually things come together during the course of this deeply dark story. Aidan – an excellent character – has to come to terms with demons of his own as well as the investigation. Sutty is simply Sutty – not really come across a character quite like him before but he works very well indeed. In addition to these two this book contains a character so deeply nasty; I don’t recall reading one quite like this before. There’s violence here too and it is nasty sometimes in case that bothers you.

I was immediately caught up in this story and found it very hard to put down. The Manchester setting is good and well used. The main characters were very good indeed – vivid and well developed. In particular the deep deep darkness in Aidan Waits is very effective in my mind. Rereading my notes that I took while reading this the word that keeps cropping up is “dark” and the book certainly is that. However I like some good dark fiction. A couple of my favourites authors are Jo Nesbo and Tim Weaver – they both write dark and write it well. Joseph Knox’s writing is up there with them as far as I’m concerned. This is actually quite a simply story – it is very well told however. I’ll read the earlier book as soon as I can and I’ll be at the front of the queue for the next one. One of the “books of the year” without question.