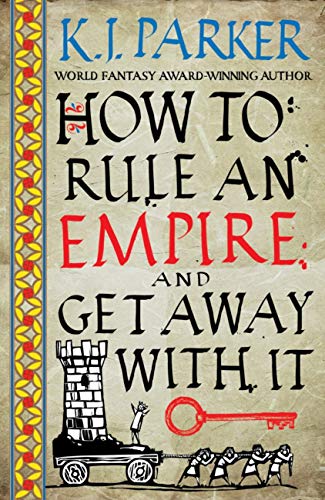 How To Rule An Empire and Get Away With It
K. J. Parker
Fantasy
Little, Brown Book Group UK
August 20, 2020
Ebook
400
NetGalley

This is the story of how the City was saved, by Notker the professional liar, written down because eventually the truth always seeps through.

The City may be under siege, but everyone still has to make a living. Take Notker, the acclaimed playwright, actor and impresario. Nobody works harder, even when he's not working. Thankfully, the good citizens of Classis appreciate an evening at the theatre even when there are large rocks falling out of the sky.

But Notker is a man of many talents, and all the world is, apparently, a stage. It seems that the Empire needs him - or someone who looks a lot like him - for a role that will call for the performance of a lifetime. At least it will guarantee fame, fortune and immortality. If it doesn't kill him first.

This is the story of Notker, an occasionally good man and a terrible liar. With razor-sharp wit, K.J. Parker has created one of fantasy's greatest heroes, and he might even get away with it.

In How To Rule An Empire and Get Away With It by K. J. Parker the city has been under siege for years. Along comes Notker, sometime playwright, sometime actor, frequent liar and part time criminal. The Empire appears to need him for a new role whether he likes it or not. This then is Notker’s story.

Maybe unsurprisingly Notker, a thespian, frequently addresses his audience – us the reader – while he is telling his tale. Initially I found this light hearted and easy to read though maybe less easy to understand what is going in the city/story. However around 20% in things became much clearer and I found myself more engaged with the story. The story is partly addressed to the reader and partly narrative of events etc. I enjoyed Notker as a character but the rest felt rather shallow.

In the end I found this mildly entertaining and easy enough to read. However there was nothing here to get my teeth into. The story was ok I guess however I was never held by it I’ve not read anything by this author previously. I don’t recall reading anything by Tom Holt – the real author – either. Comedy writing (indeed “comedy” generally) is a tough area I think. I don’t actually regret reading this however I never really felt all that engaged in the machinations of the war and the siege. I imagine fans of the author may well be pleased with How To Rule An Empire and Get Away With It even if it wasn’t particularly for me.