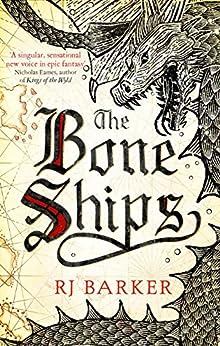 A brilliantly imagined saga of honor, glory, and warfare, The Bone Ships is the epic laugh of a new fantasy from David Gemmell Award-nominated RJ Barker.

Two nations at war. A prize beyond compare.

For generations, the Hundred Isles have built their ships from the bones of ancient dragons to fight an endless war.

The dragons disappeared, but the battles for supremacy persisted.

Now the first dragon in centuries has been spotted in far-off waters, and both sides see a chance to shift the balance of power in their favour. Because whoever catches it will win not only glory, but the war.

My immediate reaction to The Bone Ships by RJ Barker was that it was definitely different! Joron is the Shipwife of the Tide Child, a ship of the dead. It is a bone ship; that is to say it is made mostly from bone. “Lucky” Meas wants to take over the ship and become Shipwife and she does. She has a mission. Whether a somewhat decrepit ship crewed by criminals is likely to help her certainly seems a moot point.

In a sense this leaves the reader with far more questions than answers. Who are Meas and Joron? What is their backgrounds? What is the mission? How does all the new language work; Shipwife and calling ships “he” are minor compared to some of the ideas. I could go on. However if you like inventive writing you may decide that you would like to discover just what this is actually about. There are plenty of new things to find out about as we travel on Tide Child with Meas who decides she will allow Joron to take the post of Deckkeeper, her second in command.

We see Meas and Joron coming to understand one another maybe. Many of the crew are the original criminals. Meas adds some colourful characters who were known to her before. Maybe it’s just me but I liked Black Orris :). Others join the ship for its mission. To call them a colourful crew would be understating it a little!

The Bone Ships had so much that is new and for me original. The book has a small glossary at the back giving at least some of the naval terminology. However much of it you simply need to work out for yourself. This is not one of those fantasy book where everything is explained to you at or around the start and personally I like that.

The characters really are generally rich and varied. Obviously Meas and Joron play fairly major roles here. However there are plenty more interesting characters who develop as the book progresses. The flora and fauna of this world are remarkable – it all adds to the inventiveness of this book.

One of the aspects of The Bone Ships I really liked is the role of Windtalker or Gulliame. It’s a great idea. These are birds who travel on the ships and can control the wind at least to a degree. The one who travels on Tide Child may well be my favourite characters of this book. Equally it is probably almost the deciding factor in me continuing to read this series.

The writing here is very good. The characters and storylines are well worked. I guess at times I found the pace a little slow though it built up as the book progressed. There is much to discover here and that looks like it will continue in book 2. This is a very vivid tale which contains a great array of ideas, creatures, characters and the like. Fans of fantasy with a naval slant should find this an attractive read. Until about halfway I wasn’t sure if I would want to read book 2 however the latter part of the book (& the Gulliame) convinced me.