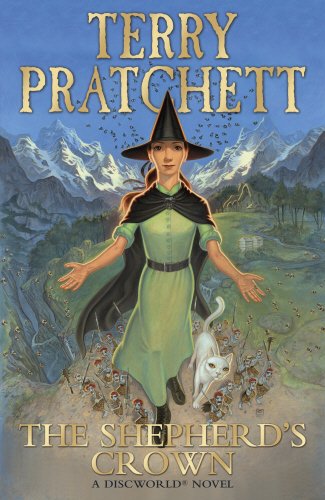 I actually find this quite a hard review to write.  I also feel fortunate to be able to read and review Terry Pratchett’s final Discworld book, The Shepherd’s Crown.  Certainly reading this brought both delight and sorrow for me.

Firstly I should probably address the “what’s it about question” and the answer, as with all Pratchett books, is life and people because he was a very skilled observer of people.  The fact that he takes our normal lives and then distorts it just a little (well – quite a lot sometimes!) is very skilful and his books always work on more than one level.  There is the basic story.  In this care Tiffany Aching, a powerful witch even if she does not feel it herself, is pitted against the malevolent power of the elves.  So far so good and a perfectly good tale of good and bad & right and wrong (& some rather strange characters).  However, on another level, it covers so many basic society issues.  Life, ageing, death (yes “that one”), continuity and change (& some magic) are all there as is Pratchett’s wonderful humour.  It would be as easy to list previous characters who do not appear in this book even though the main focus are the witches.

I found the prologue lovely and it brings some inclining of events to come.  I probably read the first 20 ish Discworld books and simply loved them; then life and other books intervened.  I would not suggest this as a starter book for someone trying Terry Pratchett for the first time – an earlier book probably in the “witches” series would be better or the first Tiffany Aching – however it is a book that any Pratchett fan will wish to read and I’d be surprised if they didn’t really enjoy it – it is Vintage Pratchett.
Digging a little deeper the story itself is fine.  I’m not sure what age reader it will be best for though possibly young readers of all ages will find it enjoyable as with other Discworld books.  However humour both gentle and barbed is a forte of Pratchett’s work and you need to have done some living to get the most out of it.  I particularly like the idea of the king going out to inspect “trouble”; the inspection would have consisted of saying “tsk, tsk” and “How long has this been going on” had his wife not had a word with him – just possibly this sort of thing might happen in our world as well as Discworld.  For me this humour is something I’ve loved about Terry Pratchett’s books for years, long before they became fashionable.  I’ll not reveal the importance of “pig-boring” as a calling – read the book you will find out and enjoy it.
Then the sadness.  I’ll close this with the closing line from the book – Tiffany says “The magic was already here” however a little of it has now sadly left our world but the legacy of these remarkable books will at least live on.

Disclosure – I received a copy of this book from the publisher.