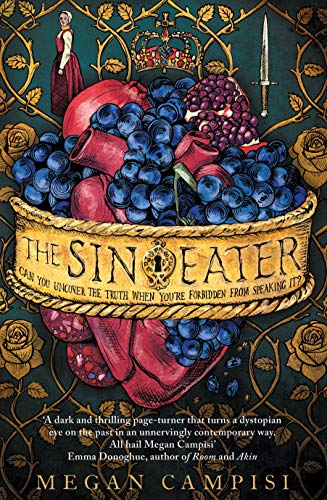 The Handmaid’s Tale meets Alice in Wonderland in this gripping and imaginative historical novel about a shunned orphan girl in 16th-century England who is ensnared in a deadly royal plot and must turn her subjugation into her power.

For the crime of stealing bread, fourteen-year-old May receives a life sentence: she must become a Sin Eater—a shunned woman, brutally marked, whose fate is to hear the final confessions of the dying, eat ritual foods symbolizing their sins as a funeral rite, and thereby shoulder their transgressions to grant their souls access to heaven.

Orphaned and friendless, apprenticed to an older Sin Eater who cannot speak to her, May must make her way in a dangerous and cruel world she barely understands. When a deer heart appears on the coffin of a royal governess who did not confess to the dreadful sin it represents, the older Sin Eater refuses to eat it. She is taken to prison, tortured, and killed. To avenge her death, May must find out who placed the deer heart on the coffin and why.

The Sin Eater by Megan Campisi starts with May Owens stealing some bread. Her crime is punished by making her a Sin Eater. Sin Eaters are shunned by society and marked. Their role is to hear the confessions of the dying. They eat ritual foods to “consume” those sins to themselves. The person dying is cleansed and can go to heaven. Sin Eaters are only spoken to indirectly, don’t touch others and do not speak other than ritual words. She is effectively apprenticed to an older sin eater. When that sin eater is taken to prison, is tortured and dies, May is left in a difficult position.

I found this an interesting story idea. There is a darkness that stays through this book and works well enough. The book follows May’s job and dilemma. Her life has a number of “lows” and not an awful lot of “highs”. I liked her character quite a lot. Other characters were rather more variable and some were simply bit parts. The atmosphere of a time past when there were servants who were below consideration was well done.

In its way this is a fairly simple story however it does have depths too. May is trying to discover who she really is and what she should do and I liked that. Whilst mine is a proof copy there is a line I liked and will share. At one point May says
“Because I can’t be cursed. I am a curse.”
This felt like a turning point to me and changed May’s outlook.

The Sin Eater can be quite colourful at times. An example would be the foods to be eaten for various sins. While I did enjoy reading this I did find it rather slow and almost laboured in the early stages. Around halfway through it really did pick up quite a bit and certainly kept me reading. I think my slight reservation is that the story never quite lived up to my expectations. However that may well be because my expectations were unreasonable. Enjoyable certainly as well as original but not outstanding.