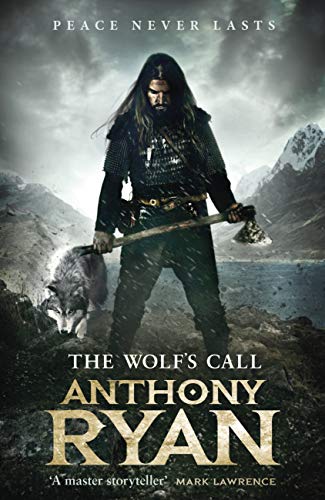 Anthony Ryan's debut novel Blood Song - book one of the Raven's Shadow series - took the fantasy world by storm. The sequels, Tower Lord and Queen of Fire were both New York Times bestsellers. Now, Anthony Ryan returns to the world of this acclaimed fantasy series with The Wolf's Call, which begins a thrilling new story of razor-sharp action and epic adventure.

Vaelin Al Sorna is a living legend, his name known across the Realm. It was his leadership that overthrew empires, his blade that won hard-fought battles - and his sacrifice that defeated an evil more terrifying than anything the world had ever seen. Yet he cast aside his earned glory for a quiet life in the Realm's northern reaches.

Now whispers have come from across the sea of an army called the Steel Horde, led by a man who believes himself a god. Vaelin has no wish to fight another war, but when he learns that Sherin, the woman he lost long ago, has fallen into the Horde's grasp, he resolves to confront this powerful new threat.

To this end, Vaelin travels to the realms of the Merchant Kings, a land ruled by honour and intrigue. There, as the drums of war thunder across kingdoms riven by conflict, Vaelin learns a terrible truth: that there are some battles that even he cannot hope to win

The Wolf’s Call by Anthony Ryan is set after the author’s Raven’s Shadow series and I have not read that series. The book starts with an intro about the dynamics – family and other – of the Stahlhast. Kehlbrand becomes Mestra-Skeltir when his older brother is sacrificed by the priests. Luralyn, his sister, narrates this. She supports him and is also capable of assisting him through visions she has – the True Dream. I confess I was a little unsure what to make of this.

I guess I was even more confused when the book then actually started in a completely different place. Vaelin, Tower Lord, is dealing with thieves and bandits. However he quickly finds that he has far worse problems that this to deal with. He journeys far with various people. The book follows Vaelin and his companions on their travels. Inevitably they encounter the might of the Stahlhast and battle can be the only outcome.

The writing here is of a very high standard. However there is also plenty of history in this initially – maybe if I had read the previous series it would have meant more and been more important. The action when it comes is excellent. While the first 50% of the Wolf’s Call left me rather disinterested the pace (& the action) increase progressively. I certainly never wanted to stop reading this.

There are a number of characters who I felt should have been far more interesting that I found them. The Jade Princess and Sherin would be among these. Equally there were many more minor roles which had good characters such as Vaelin’s brother and his niece. However none of them really came alive for me.

The last 20% or so of the Wolf’s Call was very good indeed. But in the end I was never really as gripped by this as I have been in some fantasy series I’ve read. Was it the pace early on or the fact that there was quite a lot of retrospection about the previous series? I guess it could have been the characters. Either way I need to be “taken” by a fantasy book and held. Others have been however I was not. I doubt I would read the next book in the series.