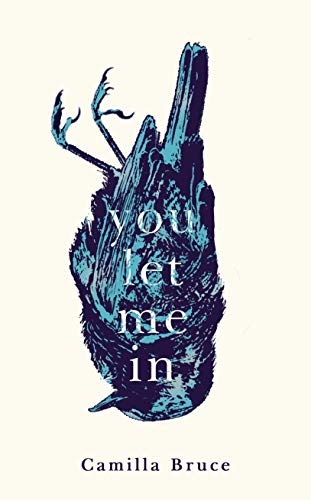 But she has left behind what seems to be a letter. Everyone knows Cassie has twice been accused of murder. Her family have long been convinced of her guilt. Could this be her confession? Or her last will and testament?

It turns out to be not quite what anyone expected. For the letter recounts two extraordinary, darkly disturbing stories.

One is the story of bloody nights and magical gifts, of children lost to the woods, of husbands made from twigs and leaves and sticks and stones . . .

The other is the story of a little girl who was cruelly treated and who grew crooked in the shadows . . .

And where is Cassie now? Dead in a ditch, or gone from this world . . . and into another?

You Let Me In is an extraordinary tale of supernatural seduction and the story of an abused child. Crossing the boundaries between the reality and somewhere else entirely, we are shown our world - judgemental and cruel - and offered glimpses of another, dark and rather different place that is hidden to most of us.

I enjoyed the start of You Let Me In by Camilla Bruce. We have (or rather don’t have!) Cassie Trip, an eccentric and ageing author who has not been seen for a year. Her nephew and niece are carrying out her final instructions by visiting her house. They find a manuscript from Cassie with instructions that they are to read it to claim their inheritance. It is Cassie’s life story and her executors read this as we do. I thought it had a good feel to it.

While a number of people appear in the book there really are only two characters of any real importance. Cassie herself and Pepper Man so named because there is apparently a slight smell of pepper when he is around. Is this a matter of “strange/imaginary childhood friends” or something much darker?… I’m guessing her nephew and niece did not expect the story that we are given. I certainly did not. We do know that Cassie had problems and fell out with her family for various reasons – what is her explanation of this.

The blurb for You Let Me In says more than once that it is an “extraordinary” book. It also states that it is dark and disturbing. I agree with these words. However, looking a little deeper, I found this simply didn’t gel together into the powerful story that I was expecting from this synopsis. The book certainly shows a very vivid imagination though. As I said earlier the start got my attention and I was looking forward to the journey. It was quite an interesting read however it was never compelling for me.

The supernatural aspect is there with tones of legend and faerie stories. However I found it hard to escape the feeling that this was simply to do with a youngster who blamed bad things on their imaginary friend who was real honestly… It is hard not to give things away at this point and I really would prefer people to discover what happens for themselves. However I do think this is a book that will divide people. Without question some will find it great but I think it may be that a proportion of people for whom it does not work. Maybe I simply never “got it” as far as You Let Me In is concerned however I can’t honestly say it worked for me.