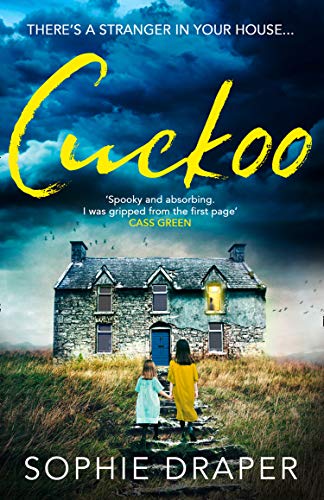 There’s a stranger in your house…

When her stepmother dies unexpectedly, Caro returns to her childhood home in Derbyshire. She hadn’t seen Elizabeth in years, but the remote farmhouse offers refuge from a bad relationship, and a chance to start again.

But going through Elizabeth’s belongings unearths memories Caro would rather stay buried. In particular, the story her stepmother would tell her, about two little girls and the terrible thing they do.

As heavy snow traps Caro in the village, where her neighbours stare and whisper, Caro is forced to question why Elizabeth hated her so much, and what she was hiding. But does she really want to uncover the truth?

Cuckoo by Sophie Draper has a very effective and intriguing opening. I certainly wanted to read more. The book really starts with the funeral of Caro’s stepmother. Sisters Caro and Steph are both there. However it is immediately apparent that the relationships in the family were and are strained. Steph left home as soon as she could and has avoided any contact with her younger sister. Caro had a deep hatred of her stepmother who had brought her up from a very young age. She too left home when she could and had not returned to the house she grew up in until the funeral.

Caro returns to the house in Derbyshire to clear it out. It is very obvious that the is an important back story here. One aspect is very quickly apparent. Caro’s stepmother teased on even tortured her with a mechanical musical instrument that they called the pear drum. There is a sense of dread from the stories as yet untold, the things not revealed. At times too there is something haunted or ghostly here or is it simply hallucinations. What is it that Caro sees and feels…

There was decent writing here in Cuckoo. Caro was a good enough character too. I really liked the line “Pandora’s box was open, the one in my head”. However some aspects did seem rather contrived to me. Returning to clear the old house would be an example of that.

Cuckoo may not be one of the best books I’ve read however how many times did I think “just one more chapter” and ended up reading three or more! I could see some of the twists coming. I guess I was not fully convinced but this was a very enjoyable read.