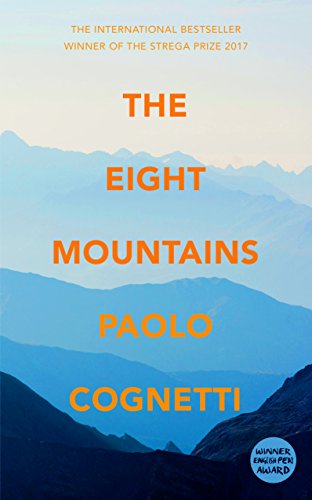 Pietro, a lonely city boy, spends his childhood summers in a secluded valley in the Alps. Bruno, the cowherd son of a local stonemason, knows the mountains intimately. Together they spend many summers exploring the mountains' meadows and peaks, discovering the similarities and differences in their lives. As time passes, the two boys come to find the true meaning of friendship and camaraderie even as their paths diverge, Bruno’s in the mountains and Pietro’s in cities across the globe.

A modern Italian masterpiece, The Eight Mountains is a lyrical coming-of-age story spanning three decades; a novel about the power of male friendships and a meditation on loyalty, being in nature, and finding one's place in the world.

The Eight Mountains by Paolo Cognetti follows part of the life of Pietro, an Italian boy. His parents live in the city, Milan during this period, however they both love the mountains. Pietro starts spending most of the Summer with his mother in a small village close to Monte Rosa. He meets a local boy there, Bruno, who is almost the same age as him, around 12. His father joins them there at weekends when he can and walks in the mountains both on his own and with Pietro.

And so the scene is set. The writing was vivid enough for me to see the village of Grana. I happily followed the sometimes awkward relationship between the two teenage boys. They explore the area and resume their friendship each summer. Pietro explores with Bruno and climbs in the mountains with his father when he is there. The best way to put it is that then he turns into a real teenager! There is a gap of some years.

The mountains are a constant theme here. Pietro’s father explores both on his own and with one or both of the youngsters. Bruno lives on the edge of the mountains and later in the book Pietro returns to them. The Monte Rosa massif has a real presence in the book.

There are times when this simply seems like a gentle ramble through the lives of Pietro and Bruno, growing up and ageing. However, on another level, this goes much deeper. It is about friends and friendship, age and ageing. It is also about time and place and a simple form of living that is rare these days particularly in the Western World. I found it to be a book of real charm, easy to read and often thought provoking.