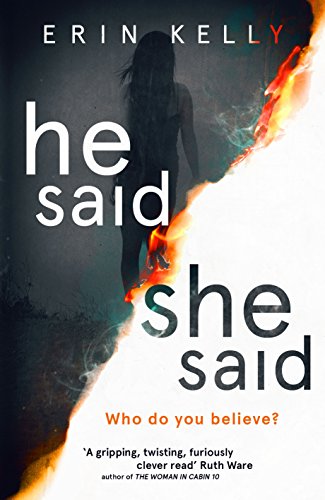 The perfect read for fans of Disclaimer, In a Dark Dark Wood and Apple Tree Yard. Who do you believe? The path of every eclipse can be predicted from now until the end of time. Kit and Laura, young and in love, pledge to travel the globe and see as many as possible together. They have no idea of the darkness that will follow. At a festival in Cornwall, in the hushed moments after the first eclipse they share, Laura interrupts a man and a woman. She knows she saw something terrible. But the man denies it. Later, in a panic, Laura tells a little white lie - which changes four lives irreparably. When the victim turns up on their doorstep, the truth seems to vanish ever further into shadow. As gratitude spills into dangerous obsession, Kit and Laura simply have to run. But they can't hide forever. With another eclipse on the horizon, the past is closing in on them again. Telling Kit the truth will cost Laura her marriage. But keeping the secret could cost them both their lives. And the person they fear the most knows exactly where they'll be...

I was really intrigued by the general storyline for He Said/She Said by Erin Kelly. An apparent assault in the aftermath of a total eclipse in Cornwall is observed. Laura and Kit, her boyfriend, call the police. The consequences will last for years. Yes – that basic idea sounded like it had real promise.

The story has eclipses running throughout the book as Kit has been a dedicated eclipse chaser all his life and Laura has joined in since they got together. The narratives switches between the two of them and has periods in the current time and others, in the past, mostly at eclipses. In the current time Laura is pregnant and she and Kit appear to be hiding, maybe from Beth who was the person assaulted.

The key to this tale in part lies in what appears to have happened, and what actually happened, at the 1999 eclipse in Cornwall. I guess this is one of those “gradual reveal” tales where we learn more and more as we read. In general the pace of this book is good and it kept me reading. The basic story concept is a good one and the tale is not badly told.

I think my main problem here is with the characters. I don’t think they were particularly convincing. In particular I didn’t find some of Kit’s actions all that believable for the character drawn. I realise that there can be twists where we see something else of a character but it didn’t convince me in this case. Equally I found myself frankly uninterested in most of the people. They simply didn’t really appeal.

Tension wasn’t really present for me most of the time which was a pity given I’d taken it to be a thriller. The later part of the book was quite tense and the ending fairly powerful however I’m left with feeling that this could have been better. Looking at the reviews already around I realise others have loved this book however it didn’t really work for me. I had no wish to stop reading this though and I don’t doubt the book will be well received.