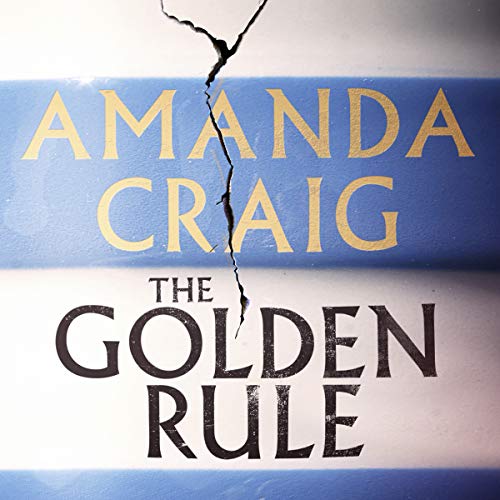 When Hannah is invited into the First-Class carriage of the London to Penzance train by Jinni, she walks into a spider's web. Now a poor young single mother, Hannah once escaped Cornwall to go to university. But once she married Jake and had his child, her dreams were crushed into bitter disillusion. Her husband has left her for Eve, rich and childless, and Hannah has been surviving by becoming a cleaner in London. Jinni is equally angry and bitter, and in the course of their journey the two women agree to murder each other's husbands. After all, they are strangers on a train - who could possibly connect them?

But when Hannah goes to Jinni's husband's home the next night, she finds Stan, a huge, hairy, ugly drunk who has his own problems - not least the care of a half-ruined house and garden. He claims Jinni is a very different person to the one who has persuaded Hannah to commit a terrible crime. Who is telling the truth - and who is the real victim?

The Golden Rule by Amanda Craig starts with Hannah on the train to Cornwall going to see her mother who is dying. She meets Jinni on the train and their conversations about their lives steadily deepen. It ends up with a plan for them to kill the other one’s husband. Given there is no connection between them it should be a perfect crime. I’m giving nothing much away here as this is the first chapter of the book. However it certainly caught my attention and had the promise of an interesting/intriguing story.

The book follows Hannah’s life after the meeting and manages to get in a fair bit of her back story too. Having been to university she goes into advertising. The feel of her time there was interesting even more so when you find out that the author followed that path! A failing marriage among other things leads to a downwards path. The marriage – now heading for divorce – is the reason that Hannah was interested in the pact made on the train. However this book is multifaceted. It works on a number of levels. I did feel this may have slowed down the narrative at times. Nevertheless I became increasingly interested in knowing just what the outcome might be.

I enjoyed the characters in The Golden Rule. There are not many main characters but they work well. Hannah particularly is good as is Stan. The more minor ones do their job’s well enough too. Cornwall itself is a real dimension in this tale. There is a feel of the place – community and family etc. Equally the book is political/environmental at times with an emphasis on Cornwall.

While this is an edgy story with some tension there is another strong theme running here. This is about relationships going wrong and the bitterness that this can leave behind.  It’s a strange combination of genres in some ways this. It is a book about plotting murder, the downward spiral of relationships, a social commentary on regions and something almost chic lit too. Maybe this is too many genres in one book however I still enjoyed it!