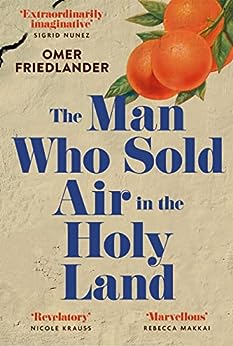 The Man Who Sold Air in the Holy Land announces the arrival of a natural-born storyteller of immense talent. Warm, poignant, delightfully whimsical, Omer Friedlander's gorgeously immersive and imaginative stories take you to the narrow limestone alleyways of Jerusalem, the desolate beauty of the Negev Desert, and the sprawling orange groves of Jaffa, with characters that spring to vivid life. A divorced con artist and his daughter sell empty bottles of "holy air" to credulous tourists; a Lebanese Scheherazade enchants three young soldiers in a bombed-out Beirut radio station; a boy daringly "rooftops" at night, climbing steel cranes in scuffed sneakers even as he reimagines the bravery of a Polish-Jewish dancer during the Holocaust; an Israeli volunteer at a West Bank checkpoint mourns the death of her son, a soldier killed in Gaza.

These stories render the intimate lives of people striving for connection. They are fairy tales turned on their head by the stakes of real life, where moments of fragile intimacy mix with comedy and notes of the absurd. Told in prose of astonishing vividness that also demonstrates remarkable control and restraint, they have a universal appeal to the heart.

There are eleven stories in The Man Who Sold Air in the Holy Land, a debut book. The author comes over as a very good story teller. The warmth and bleakness of these tales shows a real humanity to me. The stories are set in the Middle East and I would suggest having some knowledge of the history and politics of the area would bring out the best in these stories.

I found these beautifully written and often understated. That if anything added to the power of the tales for me. I could say that these are “simple” stories but they are really far more than that. Underlying the simplicity is a real feel of “down to earthness”. We have 11 very human tales of love and loss, life and death.

I’d generally pick out a story or two from such a book and probably they would be my favourites. That is just not possible with this book. For me there are no bad stories in the collection and most of them could be favourites. I made fairly brief notes on each story as I read them. Simply looking back over these notes now while writing my review sends shivers down my spine.

I guess I would highlight The Sand Collector personally. It is about similarities and differences as well as love and loss. It was powerful and well told. My notes for High Heels simply consisted of “WOW” – make of that what you will! Trying to find an “and finally” I really am torn. In the end I’ll go for The Sephardi Survivor. It was colourful and almost tongue in cheek which is quite odd given the story. The characters seemed just right to me and I loved it.

There was never a question in my mind that this was going to be a 5 star review from quite early on in The Man Who Sold Air in the Holy Land. I can’t remember the last time I read a book of short stories and enjoyed the majority of them so much.