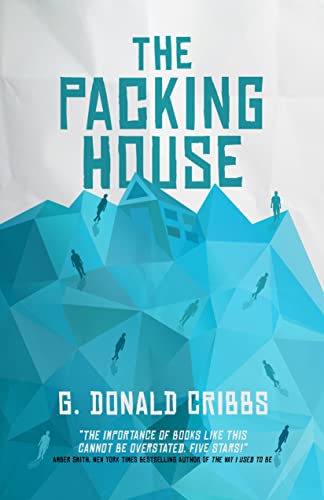 When 16-year-old Joel Scrivener has a raging nightmare in study hall and someone records it on their phone, he awakens to a living nightmare where everyone knows his secret, one that he's suppressed for ten years. Reeling as the whole school finds out the truth, Joel takes to the woods, leaving the bullies and his broken home behind.

However, life as a runaway isn’t easy, as Joel’s hallucinations and nightmares follow him into the wilderness. To stop them once and for all, he pieces clues together with flashes of the images that play endlessly inside his head – will he figure out the identity of the person who caused his nightmare before it’s too late?

We meet Joel Scrivener in the Packing House. He’s 16, living with his mother and younger brother and his father left some years ago. It’s clear that at school Joel is often uncomfortable and very angry too at times. He sleeps badly as he often has nightmares. Gradually things pile up – incidents at school, another flit with his mother and brother leaving another less than pleasant partner, the tiredness. The sudden move lands them in some less than desirable accommodation and yet another school. There is a feeling of a pressure cooker about to blow. Joel runs away…

The Packing House follows this period of Joel’s life through his eyes. The anger and problems, the puzzlement at the nightmares and issues with the lack of sleep, the deterioration of school work. We get an intimate look into Joel’s mind and feelings. It felt honest – brutally so sometimes. There are highs and lows here. I winced for Joel at times and then tutted at others. I really wanted someone to take care of him and understand him.

Joel’s story is interspersed with some of his poetry. While not happy at school he does enjoy English generally and poetry in particular. It is obviously an outlet for him but might it be more than that?

When we meet Joel at the start of this book he is probably a fairly ordinary if rather angry teenager. By the end we have learnt a lot more about him and he has found out far more about himself. I have to say that parts of this made for difficult reading. It may be that some would find this simply too hard to read. That said it may also allow others to consider their own positions too.

Personally I found this highly credible, emotional and powerful. I think it’s a very good thing to make stories like this rather more public. By way of warning this does contain stories about sexual assault – those who have concerns should be aware of that. However The Packing House also looks at the secrecy behind abuse and I think shining some light on such dark places is a good idea. Those who are living with problems may well feel less alone. Those who are dealing with issues may be helped. I guess this could be called a “YA” book however I feel it could be read by many who simply have an interest or concerns with the general subject.  Personally I’m glad I read it.