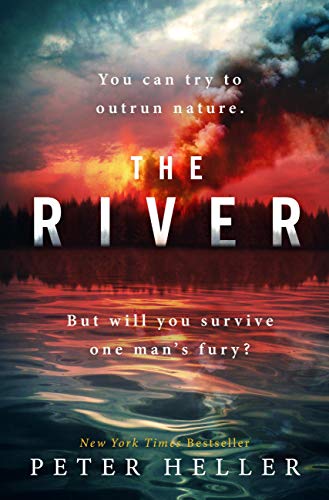 YOU CAN TRY TO OUTRUN NATURE... BUT WILL YOU SURVIVE ONE MAN'S FURY?

TWO FRIENDS
Wynn and Jack have been best friends since their first day of college: a gentle giant from Vermont and a rugged kid raised on a ranch in Colorado, brought together by their shared love of literature and the great outdoors.

THE ADVENTURE OF A LIFETIME
When they decide to take time off university and canoe down the Maskwa River in northern Canada, they anticipate the ultimate wilderness experience: two young men navigating the rapids through the quiet, imposing landscapes of North America.
No phones.
No fellow travellers.
No way of going back.

A HELLISH RIDE
But as a raging wildfire starts to make its way towards them - reducing the towering trees to charred carcasses - their idyllic expedition becomes a desperate race for survival.
And when a man suddenly appears, seemingly in a state of shock and claiming his wife has vanished, the fight against nature's destructive power becomes entangled with a much deadlier game of cat and mouse.

Because the only thing more dangerous than a burning forest is a man's thirst for revenge...

I enjoyed The River by Peter Heller from the start.  The writing was very good indeed and there was a very atmospheric feel straight away.  Jack and Wynn in the wild on a canoe trip.  They are in Canada and plan to canoe down the river to Hudson Bay.  They have been “buddies” for sometime now and they seem to have a very easy relationship.  This is to be a long trip that is a wilderness one and should respect the wilderness.  As  examples of the stripped down nature of the expedition they are taking no satellite phone nor major first aid kit.  They plan to fish and live off the land and are carrying minimal extras – what could possibly go wrong?

The start of the expedition appears idyllic.  However, despite their remoteness they realise early on that they are not the only ones on the river.  While the other people appear a little strange to the boys their primary concern is probably what nature itself may throw at them.

Generally I found Jack and Wynn fairly convincing and well written characters.  There are few other major players in the River so the fact that most of the other people didn’t have much impact on me is not surprising.  Nature itself is also a major part of the story and I thought the author used that very well indeed.  At times the story was poetic and at other times bleakly so.

It’s fair to say that all does not go well with this trip in the wild for the boys.  However I would really prefer that people find out just what happened for themselves so I’ll give nothing away.

I really enjoyed reading the River.  I loved this author’s book, The Dog Stars, however this one was not quite at the same level to me.  There was a good level of tension throughout this.  That said I can’t say I was completely convinced somehow.  I do think it would make a great film script.  Over 4 star I guess but not 5 for me.