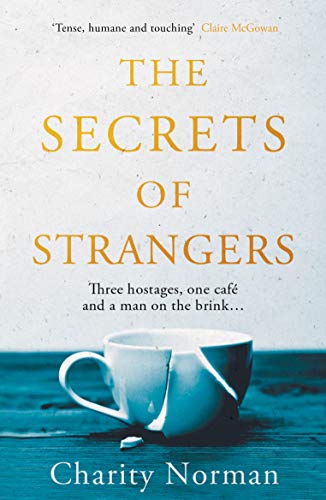 A regular weekday morning veers drastically off-course for five strangers whose paths cross in a London café - their lives never to be the same again when an apparently crazed gunman holds them hostage. But there is more to the situation than first meets the eye and as the captives grapple with their own inner demons, the line between right and wrong starts to blur. Will the secrets they keep stop them from escaping with their lives?

Something about The Secrets of Strangers by Charity Norman appealed to me. The blurb says that things go off course for a group of strangers at a London cafe one morning – it sounded interesting and I intentionally read no more. So the book opens with random strangers at or around the Tuckbox in Balham. From the start we know that Neil is one of them. He and his dog Buddy are on the streets but someone has kindly dropped some money in his tin mug. Some time with a hot drink in a warm cafe seems like a good idea…

More characters are introduced at or around the Tuckbox as the early chapters go by. In some cases it is obvious who they are but not in every case. Welcome aboard the roller coaster!

The Secrets of Strangers was a book I kept returning to whenever I could. The individual stories, as they emerge, are good. I thought that the characters as a whole were very good and well written. They engaged me and convinced me. In particular both Neil’s story and Mutesi’s worked very well indeed for me – powerfully moving at times. Ultimately Sam’s story was outstanding.

I found the first third of this highly readable and well paced. It grabbed me early on and didn’t let go. If I am totally honest the mid section felt a little slow. However I’m guessing that that would reflect the situation quite well in real life. It’s rare but the ending here really did work for me. Few will be able to put this down in the latter stages.  I think it was an excellent piece of writing.

I’d not read any of Charity Norman’s books before but I’ll certainly look at her previous books. I’d happily recommend The Secrets of Strangers to anyone after a genuinely good read.