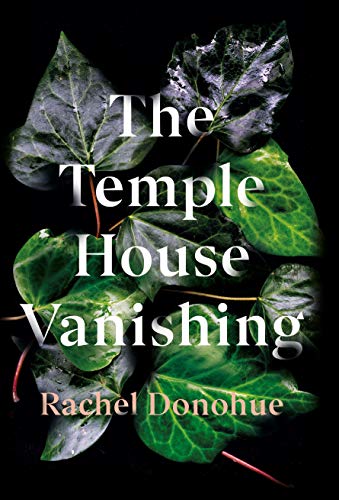 Twenty-five years ago, a sixteen-year-old schoolgirl and her charismatic teacher disappeared without trace...

In an elite Catholic girls' boarding-school the pupils live under the repressive, watchful gaze of the nuns. Seeking to break from the cloistered atmosphere two of the students - Louisa and Victoria - quickly become infatuated with their young, bohemian art teacher, and act out passionately as a result. That is, until he and Louisa suddenly disappear.

Years later, a journalist uncovers the troubled past of the school and determines to resolve the mystery of the missing pair. The search for the truth will uncover a tragic, mercurial tale of suppressed desire and long-buried secrets. It will shatter lives and lay a lost soul to rest.

The Temple House Vanishing by Rachel Donohue is set at a private Catholic school set on cliff tops in Ireland. Twenty five years ago a 16 year old girl and her arts teacher went missing and no trace of them was ever found. Nuns and prefects kept a very close eye on the girls – the atmosphere is repressive. Those who do not “fit in” are treated as outsiders. Enter Louisa, Victoria and Mr Lavelle – are they pretentious or independent spirits? A journalist who, as a very small child, lived close to Louisa – the girl who disappeared, looks for a story around the 25th anniversary of the disappearance.

For me The Temple House Vanishing took a slightly unusual approach which I’m still not sure about. The first thing we get is Victoria’s current story. She is the girl who did not go missing and this part is dramatic. After that we hear Louisa’s story in part then the journalist’s take on what she finds out. The book then takes parts of each of their stories. It intrigued me but I did find it a little odd. As it started in some senses at the end.

Throughout this book I felt there was a real sense of foreboding which impressed me. The best bits are excellent. The main characters in this were well worked. The whole story felt very evocative of time and place. On some level this is rather an ordinary story. Young girl and her arts teacher go missing from a private Catholic school. 25 years later a nosy reporter decides to dig the story up again and find out what really happened. I guess I came to this book thinking that was the story. But it isn’t really! This has far more to it than some I’ve read with a similar outline. It’s about people who “fit” and people who don’t; people with blinkers and those without. It is also about love and growing up and maybe some of the cracks in society.

Sometimes – though rarely – the publisher’s hype lives up to the story. The Temple House Vanishing this is one of those cases. There are flaws here I think however overall this is a worthwhile read. It didn’t grab me straight away but when it did it didn’t let go!