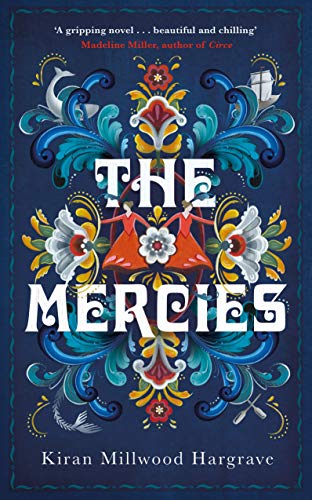 On Christmas Eve, 1617, the sea around the remote Norwegian island of Vardo is thrown into a reckless storm. As Maren Magnusdatter watches, forty fishermen, including her father and brother, are lost to the waves, the menfolk of Vardo wiped out in an instant.

Now the women must fend for themselves.

Eighteen months later, a sinister figure arrives. Summoned from Scotland to take control of a place at the edge of the civilized world, Absalom Cornet knows what he needs to do to bring the women of Vardo to heel. With him travels his young wife, Ursa. In Vardo, and in Maren, Ursa finds something she has never seen before: independent women. But Absalom sees only a place untouched by God and flooded with a mighty and terrible evil, one he must root out at all costs.

Inspired by the real events of the Vardo storm and the 1621 witch trials, Kiran Millwood Hargrave's The Mercies is a story about how suspicion can twist its way through a community, and a love that may prove as dangerous as it is powerful.

The Mercies by Kiran Millwood Hargrave is set on the remote Norwegian island of Vardø. On Christmas Eve 1617 forty fisherman set out to fish. A sudden, freak and very violent storm kills all of them Among them are Maren’s father and brother. She watches it happen. This is her story of the aftermath. The writing immediately creates a feeling of a cold and bleak land where the men who the community depended on are no longer there. What will those who are left do?

There is a real sense of isolation and some desperation at the start of this. Divisions exist within the community. Some follow the kirk and some have interests more with the Sami way of life and approach to religion. As time goes by this division become more important. A man arrives from Scotland to take the position of Lensmann at the request of the King. He brings his wife with him and is tasked to deal with the threat to the kirk. Can those who do not attend be called witches?

The Mercies is about the community and Maren in particular. We see the life she leads, her family and those who are or who become her friends. There are the ordinary minor events in life and those that are far more significant. I guess I never found myself fully engaged with Maren despite everything she went through. Even a couple of weeks later I’m not sure whether that is my fault or something about her character. I would stress that I was on her side – I simply never felt part of it.

This is more generally about women in what is predominately a mans world – women at best are accessories. It is also about a world where “different” is unacceptable and wrong. Above all it is about independent women and what was probably a gross crime against humanity. It’s powerful.

There is a sense in which I found this unremittingly bleak, indeed unpleasant, at times. Would I have chosen to read The Mercies – maybe not. However the writing is at a very high level. The story telling is so powerful in an almost understated way. If by any chance I needed convincing at the end you discover that this story is based on real events. The lives of the women concerned are fiction – the overall story is not. Maybe I didn’t quite “enjoy” this read however I am sure that I will never regret reading it.