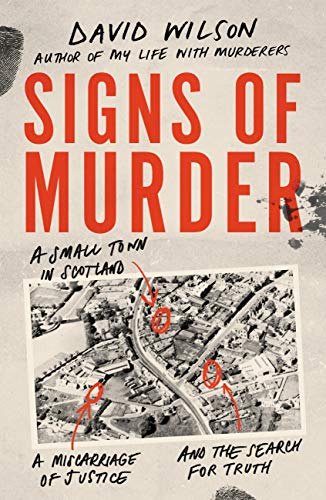 Criminologist David Wilson returns to his home town of Carluke in Lanarkshire, to revisit a story of an unsolved murder that continues to haunt its past. It's a story that anyone growing up there had embedded in their DNA.

Officially though, this isn't an 'unsolved murder'. A suspect was found guilty by a jury of his peers and so, as far as anyone official is concerned, this murder has been 'solved'. The 'murderer' has even now done his time, and been released from prison.

But Carluke has always known that a young man was wrongly convicted. This book is a search for the truth.

Signs of Murder by David Wilson

This book is about David Wilson’s (criminologist) return to his home town in Scotland. Carluke is a small town in Lanarkshire. In the 1970s, when the author was growing up there, there was a murder of a young woman. This case was “solved” quickly by the police working on it. However many of the town’s residents have doubted the conviction both at the time and since. The case is of an age so that now the alleged murderer has been released after serving his sentence. The author returns to his home town to review the case and evidence available.

I do like true crime books around and have read a few in recent years. I also like the investigations into apparent miscarriages of justice so this book was a good fit for me. The preface of this edition was very interesting. Since the first edition of the book was published the possible murderer has actually died and so can be named. Equally Police Scotland have had time to look at the author’s evidence presented here and have expressed an “interest” in it.

The book starts with fairly extensive scene setting about Carluke generally. It is clear fairly early on that the man convicted of the crime seems an unlikely choice. In practice there was very little evidence against him but a top detective had decided quite early on that he was the person who did it. Bear in mind this takes place when the world was rather different to now. The suspect was never interviewed with an “appropriate adult” or a solicitor – something that would hopefully not happen now.

In practice this book ranges quite widely beyond this specific case. The author does give his views on areas that relate directly to the case – psychology generally for example – as well as other topic that seem at best peripheral. The changes in towns in Scotland and the UK generally over the period would be an example of this. He looks at the reasons why there was a lack of protest over the conviction at the time and this offers psychological/sociological approaches on the subject.

For me the best part of this book was the work on finding a better suspect for the crime than the person convicted of it. The processes of narrowing down the possible number of people and then investigating the remaining ones was very interesting. The fact that the author was able to talk to a policeman who had been on the case and himself interviewed someone who seemed a better fit was fascinating.

In the end this is an insightful investigation into a case that was almost certainly a miscarriage of justice which I found interesting. However that is what I was expecting from this really. What I also think I got was something of the personal story of a professional criminologist which ranged quite widely. For me there was less of a balanced view taken of some aspect too although that was the stated aim. Certainly good for true crime enthusiasts. 3.5/5