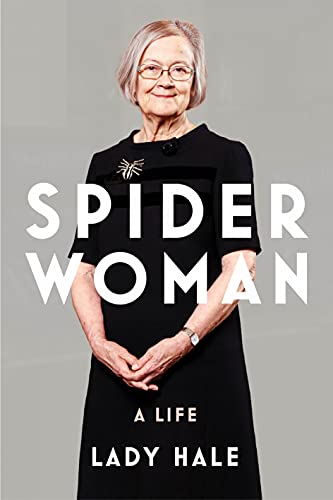 As President of the Supreme Court, Lady Hale won global attention in finding the 2019 prorogation of Parliament to be unlawful. Yet that dramatic moment was merely the pinnacle of a career throughout which she was hailed as a pioneering reformer.

As 'a little girl from a little school in a little village in North Yorkshire', she only went into the law because her headteacher told her she wasn't clever enough to study history. She became the most senior judge in the country.

How does a self-professed 'girly swot' get ahead in a profession dominated by men? A lifelong smasher of glass-ceilings, who took as her motto 'women are equal to everything', her landmark rulings in areas including domestic violence, divorce, mental health and equality were her attempt to correct that.

Lady Hale – Brenda – came from a very ordinary background. As she says she was “a little girl from a little school in a little village in North Yorkshire’, she only went into the law because her headteacher told her she wasn’t clever enough to study history”. Given that she ended up as the most senior judge in the country and was a woman in amongst an otherwise largely elite group of men, her life has been a real journey. Spider Woman tells of her childhood, her education and her development as an academic and a judge.

The start of this book covers her early childhood and education. I did find it interesting from a sociological perspective however it isn’t really a “pacey” read. The changes is society over her lifetime were one of the things that I actually found very interesting. Initially her life is very ordinary and at best might be described as middle class. By the end of her book she is in antiques robes giving judgements on important cases including aspects the government’s actions over BREXIT in the highest court in the land. The breadth of insight into society will certainly interest some.

The remainder of Spider Woman takes us through the various jobs and roles that Lady Hale has had during her career. Initially her involvement with the law was solely in academia. However – and sometimes to her surprise – she was gradually called to more and more challenging jobs directly and indirectly dealing with the laws of this country. Initially she spent time with the Law Commission reviewing and updating laws. After that she was a judge and increasingly senior ending with her time as President of the Supreme Court.

She is quite clear that the law should be paramount however, within that, she manages to look at laws through her own perspective. The fact that she is a rare female in this respect gives her views a different angle to others involved in the law. One thing that is quite clear almost from the start of her story is that she is a feminist. Maybe not in a radical sense but it is a fundamental part of her character.

In all of this Lady Hale’s sheer humanity does come through in addition to her feminist position. She is a remarkable woman who has achieved a great deal even if she has been left frustrated at times (largely by male colleagues!). Equality broadly is a cornerstone of her belief as I read it. She bristles when any arguments are made that ignore this. Given how high she has risen while holding tightly to her principles it is clear that many people who may not agree with her still respect her. She certainly finds some of the arcane processes and traditions not entirely to her taste. However she does seem to like some of the “gowns” that are part of the traditions!

Personally I found Lady Hale and her life very interesting indeed. Overall Spider Woman acts as a very interesting insight into both legal and social changes over more than half a century. My feeling is that people with an interest in society generally and the law in particular will be the ones who find this book most appealing. Others should find it worthwhile however the focus on the law and particular cases might make it less accessible to some. 3.5/5