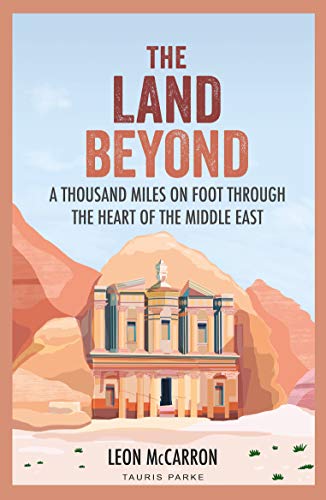 There are many reasons why it might seem unwise to walk, mostly alone, through the Middle East. That, in part, is exactly why Leon McCarron did it.

From Jerusalem, McCarron followed a series of wild hiking trails that trace ancient trading and pilgrimage routes and traverse some of the most contested landscapes in the world. In the West Bank, he met families struggling to lead normal lives amidst political turmoil and had a surreal encounter with the world's oldest and smallest religious sect. In Jordan, he visited the ruins of Hellenic citadels and trekked through the legendary Wadi Rum. His journey culminated in the vast deserts of the Sinai, home to Bedouin tribes and haunted by the ghosts of Biblical history.

The Land Beyond is a journey through time, from the quagmire of current geopolitics to the original ideals of the faithful, through the layers of history, culture and religion that have shaped the Holy Land. But at its heart, it is the story of people, not politics and of the connections that can bridge seemingly insurmountable barriers.

The Land Beyond takes author Leon McCarron from Jerusalem following a number of hiking trails, some ancient – some newer, through the West Bank and into Jordan. From here he walks into the Sinai desert and meets Bedouins. His ultimate goal is to walk up Mt Sinai. During his journey he meets a variety of people as he goes. The book is wide ranging. Landscape, history – ancient and modern, politics and the lives of locals in modern times all get a look in.

Starting in Jerusalem there is a real feel of the past in this writing. However it is a past brought vividly up to date. In the early part of this the troubles and political tensions are a large part of the story. The author does say that he attempts to take a balanced view however there are times when this is hard to do. Inevitably McCarron walks past the Barrier. He offers some interesting information on the growth of this phenomenon – border walls – in our modern times; it is almost solely a modern concept. Once in the West Bank the Barrier is literally viewed quite differently. People say that they used to talk to the folk on the other side and now they can’t… He also visits the Samaritans – the original sect of that name. I found his observations on them very interesting.

From there he heads south on the east bank and into a national park. The journey, initially with a companion, moves across the Jordan and into Arab lands properly. It is here that his companion is forced to abandon the trip permanently and McCarron heads back north to restart his adventure.

On his way south again he visits Petra. I’ve always been fascinated by Petra and so I particularly enjoyed this part of the book. He works in quite a lot of information about the place from Lawrence back to the man who rediscovered it. Here, as elsewhere in the book, he looks at the ways life is still lived and the attitudes and change that is making itself felt in a modern world.

With the journey into Sinai the trip look on a different feel for me. This is travel through desert. There is little there until Mt Sinai. However it was quite powerful to me; the stories of this ancient area and the Bedouins he meets and those who guide him. The ascent of Mt Sinai leaves you feeling the deep history of the mountain and its place in a number of cultures.

Overall I enjoyed The Land Beyond although I was never quite gripped by it. It has darkness and humour in it. It has meetings with some wonderful characters. We see such contrast between the ancient and the modern. Parts of it I found both fascinating and informative. For anyone with an interest in the Middle East this would probably make a worthwhile read.