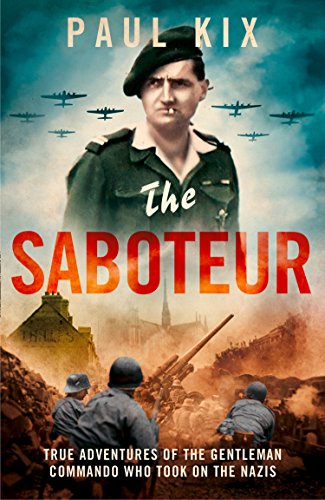 In the tradition of Agent Zigzag comes this breathtaking biography, as fast-paced and emotionally intuitive as the very best spy thrillers, which illuminates an unsung hero of the French Resistance during World War II—Robert de La Rochefoucald, an aristocrat turned anti-Nazi saboteur—and his daring exploits as a résistant trained by Britain’s Special Operations Executive

The Saboteur by Paul Kix is is the story of Robert de La Rochefoucauld. It opens with an introduction to Robert and states that it is a work of “narrative non fiction”. When the war starts Robert, a teenager, escapes to the UK via the Pyrenees and Spain and in the company of some UK pilots for a time. There he is recruited by SOE and trained in killing and sabotage. He is parachuted back into France in 1943.

The book covers the period of Robert’s war in the main. The author has done a great deal of research on his subject and the book contains numerous footnotes on sources etc. It is one of those stories of “daring do” in the war (the second world war) and I’ve read a number of them over the years. There are highs and lows and some parts are far more interesting than others. Some of the narrative on Robert’s time in the Resistance felt brief. The story of SOE, de Gaulle and Churchill in London felt far more drawn out for instance.

I found the writing style here rather strange. It felt rather padded out to me and some good editorial work might have made for a sharper offering perhaps. There are some factual mistakes here too which is a pity. A relatively modern court case starts this book and is referred to again at the end. Robert chose to actively support a Nazi sympathiser and one wonders whether the motivation for this book was to try and balance the less good publicity.

Robert definitely comes over as a character. He was certainly active in the Resistance and carried out acts of sabotage which make for interesting reading. However, objectively, he was arrested quite often and spent time as a prisoner of both the Spanish and the Germans (and was held by the English in a sense for a while). I would imagine there are many other stories that remain untold of people who did more. This is not a bad book however I cannot really recommend it.