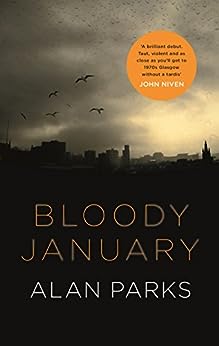 When a teenage boy shoots a young woman dead in the middle of a busy Glasgow street and then commits suicide, Detective Harry McCoy is sure of one thing. It wasn't a random act of violence.

With his new partner in tow, McCoy uses his underworld network to lead the investigation but soon runs up against a secret society led by Glasgow's wealthiest family, the Dunlops.

McCoy's boss doesn't want him to investigate. The Dunlops seem untouchable. But McCoy has other ideas . . .

In a helter-skelter tale - winding from moneyed elite to hipster music groupies to the brutal gangs of the urban wasteland - Bloody January brings to life the dark underbelly of 1970s Glasgow and establishes Alan Parks as a new and exciting voice in Scottish noir.

From the start Bloody January by Alan Parks is highly atmospheric. It says that those who were not around for the events of Bloody January say it “can’t have been that bad – but they were wrong”. The whole story takes place in the early part of January 1973 although reference is made to earlier events too. Harry McCoy, a cop who may be one of the “good guys” gets a tip off from an inmate in Barlinnie prison of a forthcoming murder. He’s not sure why he was selected for the information nor exactly what he can do about it as it is not very specific.

The story follows the investigation of this and other crimes. Throughout this book I got a very clear feel of the 70s and Glasgow. It is often hard and dirty and I guess some folk may find parts of this offensive but it seemed appropriate to me. The language is very colloquial generally. It starts dark and frankly gets darker.

I liked Harry McCoy and he is the stand out character here. He is flawed – drink, drugs and at least one undesirable friend underpin that. However he is also an attractive person. The other characters are mostly more sketched than filled out however that didn’t detract from the book for me. Even sketched they were very rooted in the time and place as Harry was.  Much though I like the character of McCoy it would be hard to point to anyone who is on the side of the angels by the end of this!

Overall I thoroughly enjoyed this book. It is dark and dirty but even that is well done. The morality of almost all the characters can be questioned – the “good” guys just as much as they criminals. That added some depth and layers to this crime story and it was better for that. For me it clearly captured place and time in the narrative. I felt the story was somewhat disjointed at times but never to a degree that bothered me. I really would like to read Alan Parks’s next book.