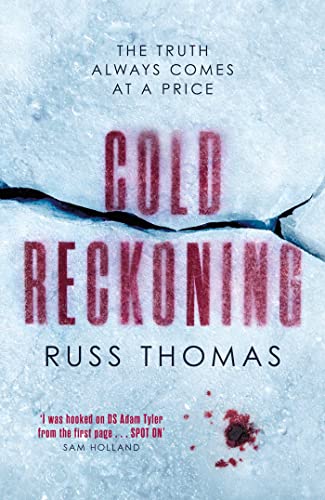 A body is discovered in a frozen lake, its wrists bound.
When it is linked to a case from 2002, Tyler, DC Rabbani and the CCRU team are called in.
But fresh blood is soon discovered at the scene and the disturbing events from all those years ago are dragged sharply into the present . . .

There is a nice opening to Cold Reckoning. Edith is out for some early morning exercise that takes her around a reservoir. At one point she sees a man. One look at his eyes tells her she should run and she does – he runs after her. So starts Cold Reckoning and it had me interested. It was edgy and tense.

Very shortly after that a body is found at the reservoir which appears to relate to a significantly earlier case. However that might not be the only mystery there. The book follows the developments of the case. As it is a “cold case” issue DS Tyler is involved with DC Rabbani. DI Jim Doggett is also involved in the case. In practice Tyler and Doggett have worked together on an investigation under the radar for some time. Has the time come to be a little more public about what they are looking at? Family issues are involved as one of the cases they are looking into is the suicide of Tyler’s father – also a police officer – some years ago. Throw in the fact that there is a DCI missing and there is plenty of “story” available here.

The setting here was good and the pace and tension well worked. Coming to a series part way through can often be a challenge and I certainly would have liked to have read the earlier books. I’ll probably do that as time goes by. The characters generally were good. I liked Tyler and I found Mina Rabbani very good too. I really liked Edith and her aspect of the story. Maybe some of the others lacked some depth but none were actually “bad”. I did find the quite large cast of characters a little confusing initially but that might have been me or simply the fact that this was the 3rd book in the series.

There is no question that I found Cold Reckoning more compelling as time went by. From the start there are some “transcripts of recordings” between a caller identified as ICER and other callers. These were intriguing though possibly not very convincing to me. Indeed my feelings about this book are rather divided. The story overall and some aspects of it particularly were good. Some parts I found rather stereotypical though. A real bugbear for me was the fact that all the story was in the present tense and written in the 3rd party. I’ve read other book like that but this one didn’t quite carry it off for me. My feeling is that this is above a 3 star book but I’m not sure how far above that. In the end the story did get to me so I’m inclined to round this up.