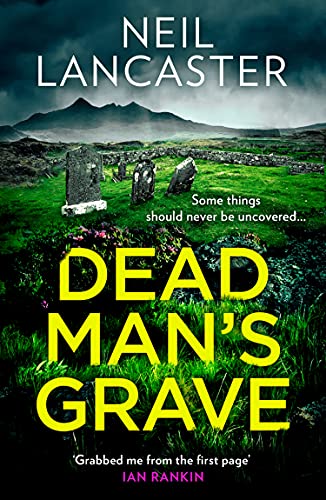 This grave can never be opened.
The head of Scotland’s most powerful crime family is brutally murdered, his body dumped inside an ancient grave in a remote cemetery.

This murder can never be forgotten.
Detectives Max Craigie and Janie Calder arrive at the scene, a small town where everyone has secrets to hide. They soon realise this murder is part of a blood feud between two Scottish families that stretches back to the 1800s. One thing’s for certain: it might be the latest killing, but it won’t be the last…

This killer can never be caught.
As the body count rises, the investigation uncovers large-scale corruption at the heart of the Scottish Police Service. Now Max and Janie must turn against their closest colleagues – to solve a case that could cost them far more than just their lives…

I found the opening of Dead Man’s Grave very atmospheric. An old crime boss visits the grave of a very old relative. It says “this grave can never be opened” on the grave stone. However, when the crime boss disappears and his family (also hard core villains) ask the police for help, the grave is opened. DS Max Craigie is the policeman who is involved. He has only recently returned to Scotland from England and has some issues from his time there. Will Scotland bring him any peace… When Max reports to the sons of the crime boss about his findings they don’t seem surprised by any of the news. Could they have possibly found out before Max saw them and if so how?

Initially I thought Dead Man’s Grave was maybe a fairly conventional cop story. “Cop” with a history coming to a new force, working with an interesting new female officer – I wondered whether this was really my sort of book. The story follows Max during his investigations. Increasingly I found parts entertainingly unconventional or dark and well worked. It seemed that my initial judgement was off the mark here.

The characters are maybe not the strongest part of this story though Max is good. I also liked the character of Janie too who acts as his partner in this story. For me it was the pace and inventiveness of the storylines that got to me. It was a book I returned to whenever I had any time free and times I read for far longer than I intended. The more I read of Dead Man’s Grave the more I got into it and enjoyed it.

In a sense this is as much an action thriller/suspense story as an ordinary cop story. While this comment will date think “Line of Duty” but with a much better ending rather than anything else! In the end I found a book that I was not expecting at lot from initially very enjoyable. Personally I will read another by Neil Lancaster and I would definitely want to read the next in this series. 4.5/5