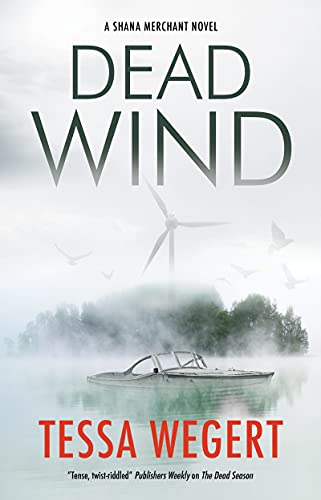 Senior Investigator Shana Merchant must dredge up dark secrets and old grudges if she's to solve the murder of a prominent local citizen in the Thousand Islands community she now calls home.

"An atmospheric, sophisticated thriller with layers upon layers of secrets" - Sarah Stewart Taylor, author of the Maggie D'arcy mysteries

The body is discovered on Wolfe Island, under the shadow of an enormous wind turbine. Senior Investigator Shana Merchant, arriving on the scene with fellow investigator Tim Wellington, can't shake the feeling that she knows the victim - and the subsequent identification sends shockwaves through their community in the Thousand Islands of Upstate New York.

Politics, power, passion . . . there are dark undercurrents in Shana's new home, and finding the killer means dredging up her new friends and neighbours' old grudges and long-kept secrets.

That is, if the killer is from the community at all. For Shana's keeping a terrible secret from almost everyone around her: eighteen months ago she escaped from serial killer Blake Bram's clutches. But has he followed her, to kill again?

Dead Wind, set in the Thousand Islands area of America, is the third book about Senior Investigator Shana Merchant. The setting is an area of small communities where people know each other. Grudges can be held for a long time. A body is found on an island (on the Canadian side) and Shana and her fellow investigator, Tim, are sent to investigate any possible USA connection. Indeed there is a possibility that the crime might have been committed by someone who is not local at all. Some 18 months earlier Shana was held captive by a serial killer in New York. She only just escaped with her life and it is possible he has followed her upstate.

Dead Wind follows the investigation into the murder as well as Shana’s life more generally. Local politics and the environment are aspects of this as is Thousand Islands life more generally. The possibility that the murder was committed by Shana’s abductor is always in the background. If he is hiding out in this rather remote area how is he doing it?

I did like the way the setting was used. The fact that the area is very attractive but can at times be rather spooky was well done. A number of characters roam the pages of this. Some are more important, some less so. However I didn’t really get a feeling that they were well fleshed out. Shana’s character wasn’t bad though seemed to lack some depth for me given this is her 3rd appearance in a book. The same really applies to Tim for me. I felt I wanted more from a number of these. Shana’s boss would be a good example. She seemed an interesting character but I never found out enough for my taste.

Bram Blake may well be an obsessed serial killer with an interest in Shana. However it is quite clear throughout this book that Shana is equally obsessed with Blake. The narrative kept returning to him and, at times, it seemed to overwhelm the story. I certainly can’t say that Dead Wind was bad at all. Equally though I really didn’t find that it gripped me. In general it felt rather superficial. That is not to say that parts of it were not good. I guess it would probably have been better to read the two earlier books first to get the background.