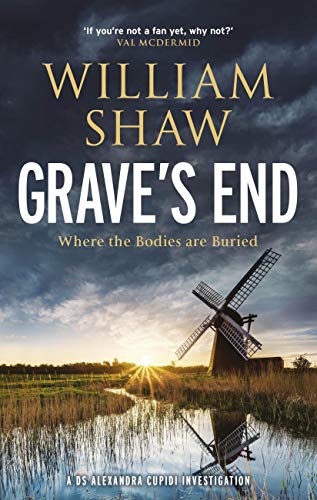 An unidentified body is found in a freezer.
No one seems to know or care who it is or who placed it there.

DS Alexandra Cupidi couldn't have realised that this bizarre discovery will be connected to the crisis in housing, the politics of environmentalism and specifically the protection given to badgers by the law. But there are dangerous links between these strange, reclusive, fiercely territorial creatures and the activism of Cupidi's teenage daughter Zoe and her friend Bill South, her colleague Constable Jill Ferriter's dating habits and long forgotten historic crimes of sexual abuse - and murder.

Grave’s End by William Shaw starts with an unidentified body in a freezer and an old badger in his sett – one entrance is blocked and the area may be built on. There can’t be a connection can there? Zoe – Alex’s teenage daughter – is becoming increasingly environmental and may be getting into trouble. I found this a very good start to the latest (3rd) book in this author’s series featuring DS Alexandra Cupidi.

Grave’s End follows Alex’s investigation of the body in the freezer through a number of twists and turns. The threads are wide ranging and some go back a long time. The emphasis on the environment is also a strong aspect of this story. Much of the tale is again set on the Kent coast around Dungeness where Cupidi lives with her daughter. It’s a setting that has been used effectively in the previous books. While this certainly could be read as a stand alone I would suggest that new readers start with the first book – Salt Lane.

I came to this series a little late. I guess my first reaction to it was that it was somewhat ordinary though made for a good read. However by the end of the first book I realised that the characters were very good. Alex, Zoe and Bill South made for a strong and interesting team. Add in Jill (a DC) who is entertaining and I realised I’d like to read more about these people. It isn’t just the characters either. The landscape/environment also play a role in these stories and are used to good effect.

I found Grave’s End very readable. The first half runs at a slower pace than the second half. However by the time you get to the second half the book becomes tense and fairly unputdownable. I enjoyed the story and I enjoyed the characters. I will certainly read more of this series. There is a sort of prequel to these in the form of The Birdwatcher which is on my “to read” list. I’d suggest that this series would be good for anyone who likes a decent crime read. Fans of the series should be very happy with this latest offering.