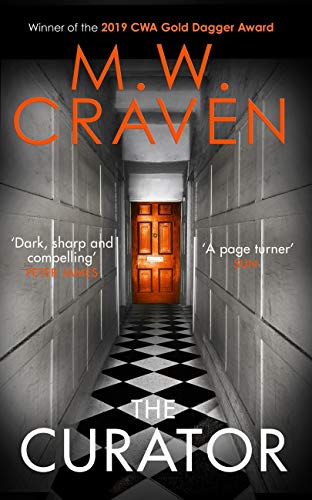 It's Christmas and a serial killer is leaving displayed body parts all over Cumbria. A strange message is left at each scene: #BSC6. Called in to investigate, the National Crime Agency's Washington Poe and Tilly Bradshaw are faced with a case that makes no sense. Why were some victims anaesthetized, while others died in appalling agony? Why is their only suspect denying what they can irrefutably prove but admitting to things they weren't even aware of? And why did the victims all take the same two weeks off work three years earlier?

And when a disgraced FBI agent gets in touch things take an even darker turn. Because she doesn't think Poe is dealing with a serial killer at all; she thinks he's dealing with someone far, far worse - a man who calls himself the Curator.

And nothing will ever be the same again...

It was good to be back with Poe and Tilly again for a third time in The Curator by M. W. Craven. In this new case pairs of fingers are found at three different crime scenes. If that wasn’t strange enough there is also a note with a hashtag left with them too. The hashtag – #BSC6 – proves hard to get a handle on – even with Tilly’s help. Is this something fundamental to the case? Maybe halfway through you get to the point where you think you know what is going on – you don’t! After that the tale gets deeper and darker. Poe get a call from an FBI agent. Law enforcement in the USA do not believe her but she tells Poe a strange story. The sheer deviousness of this tale takes some beating.

Once again Poe himself is an investigator par excellence. He manages to look in places that others don’t. Tilly and her partnership with Poe are aspects of these books that I really enjoy too. Estelle Doyle is back too-  Poe’s ”go to” pathologist from the last book. She is a very rich and colourful character in her very particular way. Estelle gives Poe some chilling advice that he should maybe pay attention to…

As with the previous books in this series there is a fairly slow pace for the early part of the book. However after that the book is very hard to put down. These stories about Poe and Tilly are deceptively simple. At first sight that is – then they hit you with a brick between the eyes. Indeed Poe says that “the difference between a thing and a weapon is intent”. The author does seem to have a fairly twisted mind (!!) which means that the cases are very twisted too – it all adds an extra something for me.

I thought that the first book in this series was good. The second book was very good. For me this book is the best of the series so far. I was strongly suggest that anyone coming to this series fresh should consider reading them in order. The development of the characters is part of the enjoyment. It is a series that has steadily got under my skin and become one of my favourite UK based police reads. They are good tense stories and highly entertaining too. Hopefully this author can sustain and develop these for some time to come.