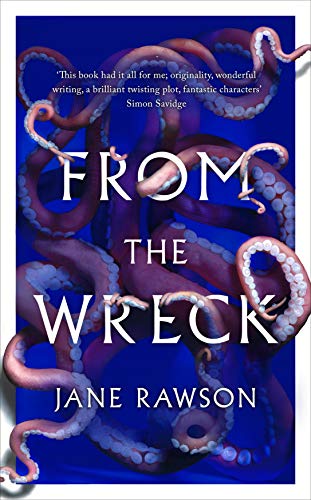 Because as he clung onto the wreck, George wasn’t alone: someone else – or something else – kept George warm and bound him to life. Why didn’t he die, as so many others did, half-submerged in the freezing Southern Ocean? And what happened to his fellow survivor, the woman who seemed to vanish into thin air?

George will live out the rest of his life obsessed with finding the answers to these questions. He will marry, father children, but never quite let go of the feeling that something else came out of the ocean that day, something that has been watching him ever since. The question of what this creature might want from him – his life? His first-born? To simply return home? – will pursue him, and call him back to the ocean again.

Blending genres, perspectives and worlds, Jane Rawson’s From the Wreck - winner of the Aurealis Award for Best Science Fiction Novel- is a chilling and tender story about how fiercely we cling to life, and how no-one can survive on their own.

From The Wreck by Jane Rawson is for me an unusual book. I don’t think I’ve read anything quite like it before.  George Hills is wrecked on the steamship Admella where he was a steward.  He was one of very few who survived.  The person who he survived with – female – disappeared shortly after they were rescued.  Interesting anyway and more so as so far it is the story of an ancestor of the author.  Then the story gets rather different!

From The Wreck follows George’s life and that of his family.  It also features the persona who vanished and appears again from time to time.  What was it that George came across after the wreck and what are the consequences for him and his family?

I thought that the writing here was excellent.  Evocative and mysterious it created a great atmosphere for this intriguing tale.  It manages to be warm at times and quite chilling at others.  There really is an other worldly feel to this sometimes.  The characters are well worked and felt real to me.

From The Wreck is not a long book and I think better for that.  One of those cases where  less really is more.  There is room for the reader to think about this tale in the broadest way.  It is quite a hard book to review without giving things away.  I would prefer the reader to follow their own journey through this tale.  For myself I thoroughly enjoyed reading it – it certainly deserves to won an award as a Sci Fi novel in my opinion.