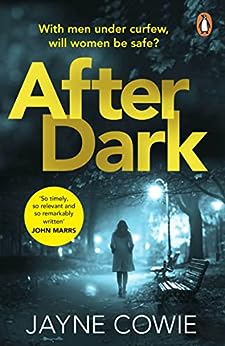 WELCOME TO A WORLD WHERE WOMEN HOLD THE POWER.

They are no longer afraid to cross a dark car park, catch the last train, or walk home alone.

With the Curfew law in place, all men are electronically tagged and must stay at home after 7pm.

It changed things for the better. Until now.

A woman is murdered late at night and evidence suggests she knew her attacker.

It couldn't have been a man because a Curfew tag is a solid alibi... Isn't it?

After Dark by Jayne Cowie

After Dark is set in the not too distant future.  There has been a series of murders of women by men and a law was introduced that put men under a curfew. Shortly after that men were all electronically tagged and so were unable to be away from their homes between 7pm and 7am. Women’s lives became much freer. They also are far more dominant in the workplace and elsewhere. And then a woman was attacked and murdered between those hours. The attacker couldn’t be a man as he would have been tagged and discovered wouldn’t he?

There is a cast of smaller and larger characters in After Dark. Pamela is a police officer who is investigating the case and she is nearing retirement. Sarah is a tagger who is responsible for making sure men are tagged. Her husband is in jail for breaking Curfew. Cass is her teenage daughter. Helen is one of Cass’s teachers. This is not all the characters but they are probably the main ones. For me some of characters here became rather stereotypical at times sadly. A possible issue for me is that while the characters generally were ok I didn’t find myself really engaged with any of them continuously.

The story does having shifting time lines. The murder aspect of this is “current time” while the other chapters start four weeks earlier and move towards the time of the murder. I guess there are two very distinct aspects of this story for me. There is the crime story and also the “what would the world look like if the Curfew idea was real” one. The crime story side was decent enough. On its own it might not have worked fully but couple it with the Curfew and I enjoyed it. The book manages to maintain a sense of mystery for quite some time – I prefer not to have spoilers so will say no more!

If anything the Curfew idea of After Dark was even more edgy than the crime side. The broader idea of Curfew was interesting and maybe shone something of a light onto the subject. It was definitely thought provoking. The detail of the idea however seemed to lead into the fact that at best men were a nuisance. I’d like to think that my world view was a fairly balanced one but I did feel rather uncomfortable reading this at times (and maybe that was the idea). Certainly there were no “good” men in this.

In the end maybe this was not not quite what I was expecting but in part it was maybe better than that. I do think that it was good that it was written. Possibly this is a hard book for any men to offer much in the way of comment on. It feels to me as though the tone of this at times seems almost comparable to some of the less desirable male stances. I am glad I read this and I think it will stay with me for sometime to come. I’ve be really interested in seeing another book from this author. 3.5/5