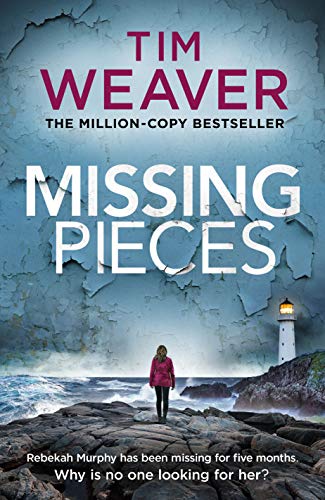 You don't know your darkest secret.

Rebekah Murphy knows too much. . .

She knows she's alone on an abandoned island with a killer on her trail.
She knows that to get home to her children, she must survive long enough to understand why this is happening.
She knows someone tried to kill her for a secret.
What she doesn't know is what that secret is . . .

He doesn't know where to find Louise Mason. He doesn't know how and why she vanished into thin air three months ago. He doesn't know the identity of the man last seen talking to her. Not yet.
But what he does know it that he's a week away from retirement -- and if he doesn't find out where Louise went, no one will.

What neither Rebekah nor Detective Travis realise is that each holds a missing piece from the same puzzle -- and it will cost them everything they love to finally solve it . . .

So many of Weaver’s books have a darkness in them and Missing Pieces is no exception. Something bad has happened to Rebekah – she appears to be alone on an abandoned island after being attacked. However she came with her brother so where is he now? She knows that someone is trying to kill her but she has no idea why. Detective Frank Travis, a week from retirement, is frustrated by the case of a missing woman (not Rebekah) who seems to have vanished completely. It is the way of such things that a connection might eventually emerge!! There are “Missing Pieces” in these puzzles.

Rebekah, isolated on the island, is doing everything she can to survive and return to her children. She presumes she will be missed but needs to stay fit mentally and physically. She also wants to work out just why she is in this position – is there something in her past that might provide a clue?

Frank, a good cop who wants to solve this one case before he retires, has a nagging feeling that he is missing some information about his case. He gets an anonymous phone call suggesting that he reviews a subject he had dismissed. He isn’t sure that the call is not an attempt to put him off the scent. That simply makes him want to get to the bottom of the case even more.

These characters are – as is usual with Tim Weaver – well rounded and have a good depth to them. The more I read Missing Pieces the more determined I was to know why the events had occurred. The setting on the island with Rebekah almost created another “character”. I was steadily drawn in.

For me Missing Pieces is classic Weaver. Rather dark and bleak, with very good pace and tension, coupled with vivid characters. I’ve been a fan of the Raker series of books almost from their start and have read them all. I was unsure what to expect from a non Raker story but I needn’t have worried. Any fan’s of Tim Weaver’s books will be completely at home with this. As this is a standalone story no knowledge of the Raker series needed however anyone trying this will probably want to read more. Tim Weaver’s writing is of a very high standard and that has been maintained for some time now. I do hope that continues for many years to come – I will certainly continue reading what he writes!