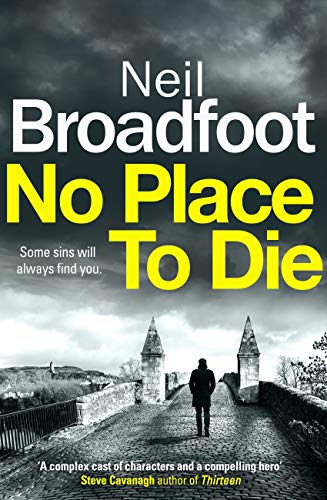 Once a controversial venture capitalist, Charlston reinvented himself as a personal and business development guru after surviving an attempt to take his own life when a business deal went disastrously wrong. So when he decides to host a weekend retreat on the outskirts of Stirling for more than 300 people, Connor Fraser is drafted in to cover the security for a man who is at once idolised as a saviour and hated as a ruthless asset stripper.

For Connor, it's an unwelcome assignment. He's never had much time for salvation by soundbite, and Charlston's notoriety is attracting the attention of reporter Donna Blake, who's asking more questions than Connor has answers for.

But when an old colleague of Donna's is found brutally bludgeoned to death, and the start of Charleston's weekend of salvation becomes a literal trial by fire, Connor must race to unmask a killer whose savagery is only matched by their cunning.

In No Place to Die by Neil Broadfoot venture capitalist, Blair Charlston, turned business guru hires an ex policeman, Connor Fraser, to act as security manager for an event he is hosting. Into this mix comes Donna, an investigative journalist. It is apparent fairly quickly that a killer has some interest in the event. Who are they and what do they really want? Can Connor prevent the bloodshed? And does the cause lie in Blair’s past?

No Place to Die follows a straight time line in short chapters with punchy writing. I found the start intriguing. Almost immediately I found mention of the fact that there had been a previous book about Connor Frazer. I would have preferred to have known that prior to selecting this book. Initially I felt I was at a disadvantage however that faded as the book went on.

No Place to Die is an action thriller type book in the main I guess. The pace was certainly good. However I didn’t find the characters particularly deep generally. This has a very contemporary feel to it and the writing is very crisp but it also feels as though it lacks depth at times. I guess in the end I found this rather ordinary though perfectly readable. For me it has something of a feel of Brookmyre’s stories but I didn’t find the characters as interesting or compelling.