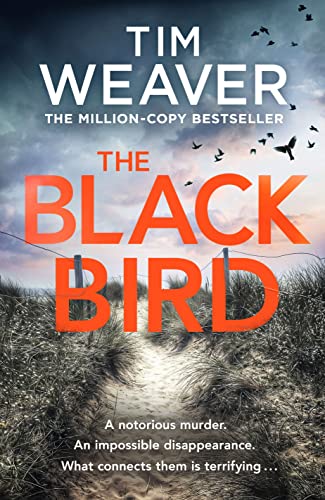 Ten seconds before the crash, Cate and Aiden Gascoigne are recorded on CCTV. The couple are laughing - happy, untroubled.

Then their car plunges into a ninety-foot ravine.

The impact should kill them. And if that doesn't, the fire will. Within seconds, the vehicle is an inferno - with the Gascoignes trapped inside.

But when fire crews arrive at the scene, they find something impossible.

The vehicle is empty.

Cate and Aiden have vanished.

The Blackbird by Tim Weaver

It was great to be reading the 11th David Raker book by Tim Weaver. I thought that the opening of The Blackbird was excellent. A car crash that no one could have survived, so where are the bodies? Two witnesses were there within a couple of minutes of it happening and saw no one emerge from the car and there are no bodies in the burnt out car. The book follows Raker’s investigation into their disappearance on behalf of the family.

I guess anyone who has read previous books in the series will have an idea of what might happen. If you haven’t tried these books and enjoy a good thriller then do start from an earlier book to get the background stories of the main characters (maybe book 3!). It becomes increasingly tense and pacey. The twists and turns are very good. Some of the people from previous books are in this and Raker does get to meet some new characters too.

Overall and for me The Blackbird is classic Weaver/Raker stuff. It’s very well written and has a pace that kept me with it all along. I do love the “impossible mysteries” that Weaver sets for Raker to solve. This is probably one of the better ones too as far as I’m concerned. It’s good to see Healy around again as well as some of the other smaller part characters from previous books. The presence of “old friends” is always good! It seems possible to me that Raker will have gained some new friends for the future too perhaps. I do have a minor reservation with an aspect of the plot here however I dislike spoilers and, taking the book overall, it was a small matter. Fans should be very happy with this latest outing for Raker – it was good to be reading one of his stories again.

So often the endings of book generally are maybe not quite there. I had some doubts about this one at one point. However I found myself laughing aloud at the end of The Blackbird – my thanks to the author for the ending!

My review of the last Tim Weaver book is here (not a David Raker one) and the previous David Raker book review is here.