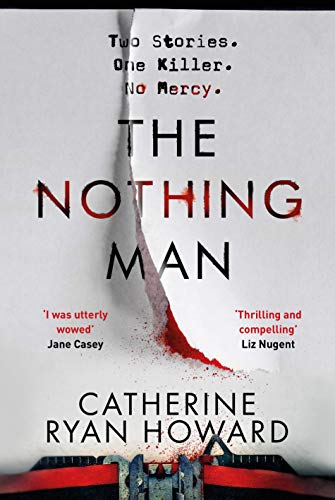 I was the girl who survived the Nothing Man.
Now I am the woman who is going to catch him...

You've just read the opening pages of The Nothing Man, the true crime memoir Eve Black has written about her obsessive search for the man who killed her family nearly two decades ago.

Supermarket security guard Jim Doyle is reading it too, and with each turn of the page his rage grows. Because Jim was - is - the Nothing Man.

The more Jim reads, the more he realizes how dangerously close Eve is getting to the truth. He knows she won't give up until she finds him. He has no choice but to stop her first...

The Nothing Man by Catherine Ryan Howard offers itself as a book within a book. Eve Black is the survivor of an attack which left both her parents dead as well as her younger sister. After many years she has started to come to terms with this and writes this “true crime” memoir about her experiences partly as a cathartic process. Jim Doyle, now a security guard comes across the book when it is published. He is compelled to read it. Some years previously he was “The Nothing Man” – the killer of Eve’s family. He acquired the name when the police admitted that they had nothing on this serial killer.

The book consists of “Eve’s story” about the murders and her subsequent life. It takes some time before she decides/is encouraged to write about her experiences. This leads to her investigate all the crimes that seem to have been committed by the Nothing Man and then publishing her results. The other side of the book is the narrative that concerns Jim’s reading of the book. This is signposted simply and effectively by changing the font size so we know who we are with.

I found that this really had a feel of a true crime non-fiction story. I’ve read a few of them and there were times when I simply forgot that this was fiction. You are then reminded that the serial killer is reading along with you…! I found this eerily convincing in the end. Eve was every bit a survivor and victim. Early on Jim was coldly disinterested. This changes as he reads more.

The Nothing Man grabbed me from the start. For me it seems like a genuinely original piece of fiction. It was tense and convincing. One of the best books I’ve read in quite some time and I’d be fairly sure it will be one of my books of the year. I’d suggest that anyone who enjoys a decent crime read might like to take a look at this one.