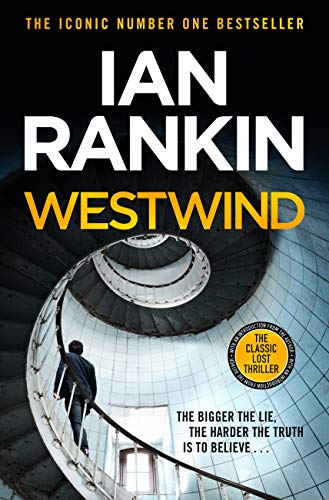 It always starts with a small lie. That's how you stop noticing the bigger ones.

After his friend suspects something strange going on at the launch facility where they both work - and then goes missing - Martin Hepton doesn't believe the official line of "long-term sick leave"...

Refusing to stop asking questions, he leaves his old life behind, aware that someone is shadowing his every move.

The only hope he has is his ex-girlfriend Jill Watson - the only journalist who will believe his story.

But neither of them can believe the puzzle they're piecing together - or just how shocking the secret is that everybody wants to stay hidden...

A gripping, page-turning suspense masterclass - available in print for the first time in nearly thirty years.

Westwind is by Ian Rankin, an author I’ve enjoyed for many years now. However this is a book I’d not come across. It was first published in 1990 in the early part of his career. It is a standalone thriller. Martin Hepton works at a satellite communications facility. Something strange happens one day. After that one of the people he works with goes missing and Martin does not believe the official line. He keeps asking questions but that might cause him trouble.

This republication of a “lost” thriller has been given a bit of a makeover by the author and comes with a good forward by him too. The story involves rockets, satellites and the security service. Given the publication date it was written when the Cold War and the Berlin Wall were still facets of life. My first thoughts as I followed Martin on his quest for the truth was that this was a little dated. What surprised me as I continued to read it was just how little that was and how it didn’t bother me.

Sure – some aspects such as mobiles phones and the like gave it a dated feel. Equally it did feel a little naïve at times. However the pace and tension was very good indeed. There were some interesting characters roaming the pages too. There were times when I thought it was a bit simplistic but in the end I enjoyed reading this book. I have some doubts it will be in the best sellers list however there will be plenty of people interested in reading Westwind by Ian Rankin and certainly fans who missed it should enjoy it.